This book is in the Public Domain 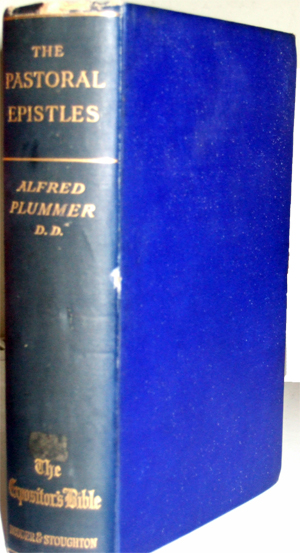 Chapter I - The Character and the Genuineness of the Pastoral Epistles

Chapter IV - The Moral Teaching of the Gnostics.-Its Modern Counterpart

Chapter VI – The Prophecies on Timothy. - The Prophets of the New Testament an Exceptional Instrument of Edification

Chapter VIII - Elements of Christian Worship: Intercessory Prayer and Thanksgiving - The Solidarity of Christendom and of the Human Race

Chapter X - The Origin of the Christian Ministry: Various Certainties and Probabilities Distinguished

Chapter. XII - The Relation of Human Conduct to the Mystery of Godliness

Chapter XIII - The Comparative Value of Bodily Exercise and of Godliness

Chapter XIV - The Pastor's Behaviour Towards Women - The Church Widow

Chapter XVIII - The Epistle to Titus - His Life and Character

Chapter XXVII - The Character and Contents of the Last Epistle of S. Paul - The Nemesis of Neglected Gifts

Chapter XXXI - The Power of a Belief in the Resurrection and the Incarnation - The Gospel of S. Paul

Chapter XXXII - The Need of a Solemn Charge Against a Controversial Spirit, of a Diligence Free From Shame, and of a Hatred of the Profanity which Wraps Up Error in the Language of Truth

Chapter XXXVI - The Personal Details a Guarantee of Genuineness

Chapter XXXVII - The Apostle Forsaken by Men but Strengthened by the Lord - The Mission to the Gentiles Completed - The Sure Hope, and the Final Hymn of Praise